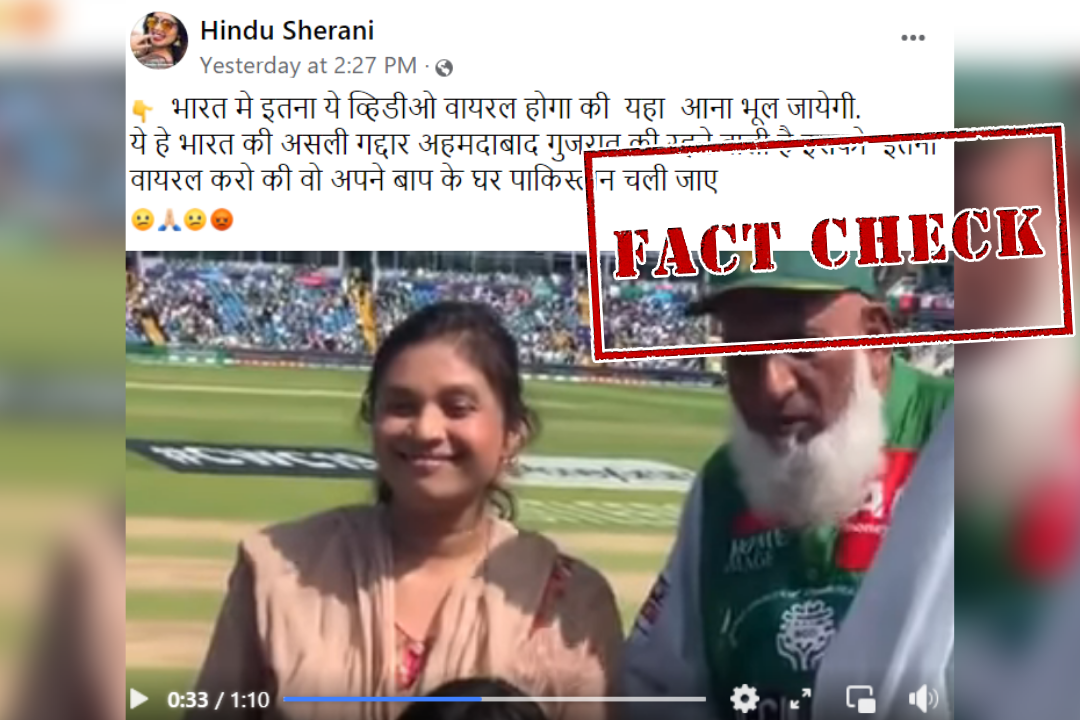 The ICC men’s T20 World Cup 2021 is currently being played in UAE and Oman. On October 24, Pakistan defeated India for the first time in a World Cup match by 10 wickets. This defeat later spurred an outburst against the Indian cricket team on social media.

In this backdrop, a video of a woman walking up to the stands of a cricket stadium and raising pro-Pakistan slogans has gone viral on social media. People are sharing this video by linking it to the recent India-Pakistan match and stating that the woman is a resident of Gujarat and is a “real traitor of India.”

The video is being shared on Facebook with a caption in Hindi that can be roughly translated in English to: “This video will be so viral in India that you will forget to come here. This is the real traitor of India, a resident of Ahmedabad, Gujarat, who make it so viral that she goes to her father’s house in Pakistan.” 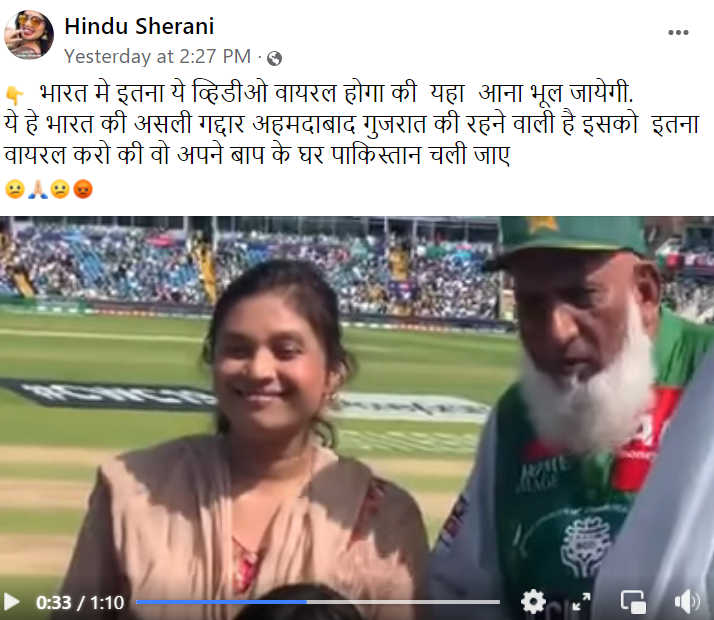 Starting with our investigation, we extracted keyframes from the video and performed a Reverse Image Search. This led us to a tweet uploaded by The Times of India on July 4, 2019, that carried a screenshot of the viral video. The text read, “Ahmedabad woman stirs up sentiments with pro-Pakistan slogans in the video.”

The article link attached to the tweet states, “Video clips of a woman shouting pro-Pakistan slogans during an ICC World Cup match in the UK has gone viral on social media. The video was much shared and discussed, especially as the woman claimed to be from Juhapura, one of the largest Muslim ghettos in Ahmedabad.” 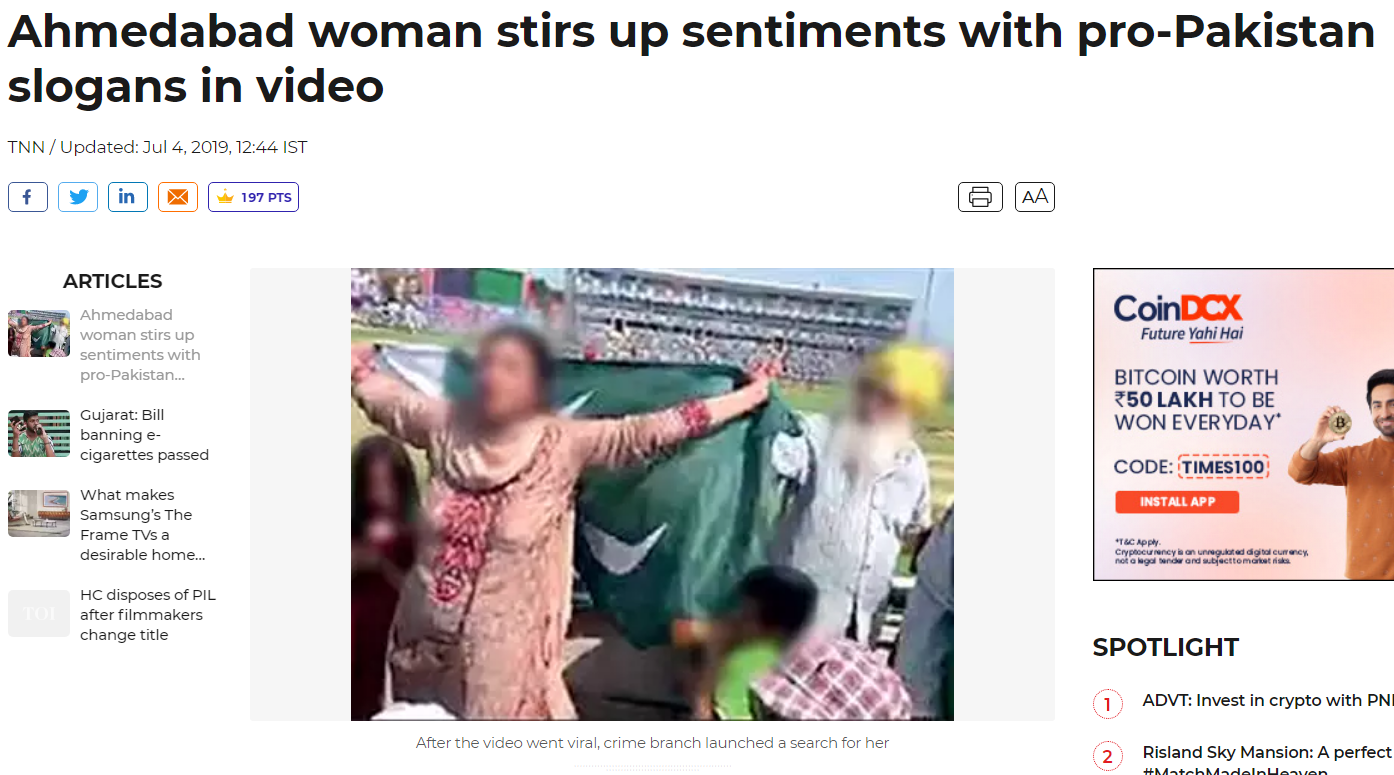 We found another news article published on July 4, 2019, that featured the same viral video. The article read, “The City Crime Branch has launched a search for the woman after the video went viral, with police investigating at various locations in the city to identify her and her family. A separate team also approached the Immigration Department for information. A senior crime branch official told the Times of India that it was possible that the woman seen in the video was from Ahmedabad and was currently living in the UK.” 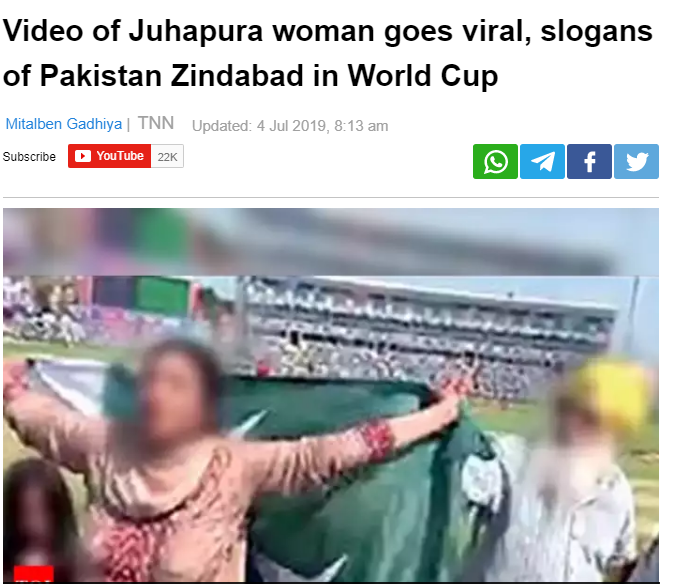 Thus, it is evident from the above information that an old video of a woman shouting pro-Pakistan slogans was shot in the UK in 2019 and is not related to the recent India Vs Pakistan Men’s T20 World Cup match. Therefore, the viral claim is misleading.