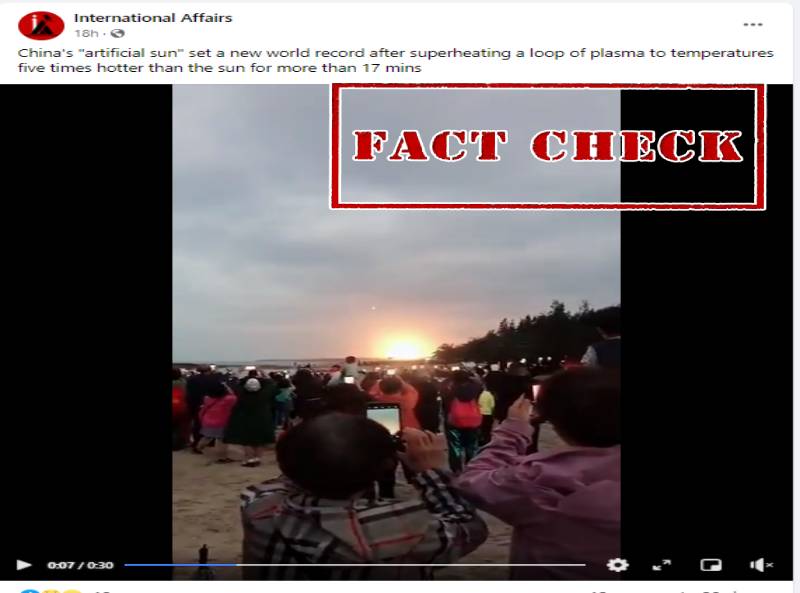 Dubbed as ‘artificial sun’, China’s nuclear fusion reactor was officially switched on January 4, 2022, as per reports. As per reports, the reactor holds the record for being able to sustain temperatures five times higher than the sun for over 17 minutes.

In this backdrop, a video is widely being shared on social media in which a crowd can be seen looking at the rising flames. The video is being shared with a caption claiming that the viral video is of the launch of China’s artificial sun.

The caption associated with the video reads, “China’s “artificial sun” set a new world record after superheating a loop of plasma to temperatures five times hotter than the sun for more than 17 mins.” 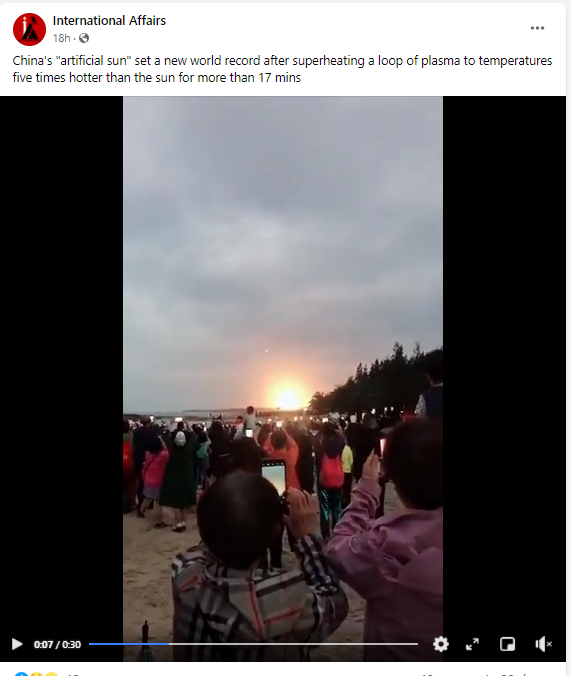 On searching with the keyword, ‘China’s Artificial Sun’, we found that the ‘artificial sun’ is a nuclear fusion device situated at a research laboratory in Chengdu, in eastern China’s Sichuan province.

We found that an image of the nuclear fusion device was also uploaded by Getty Images with a caption: “Chinas HL-2M nuclear fusion device, known as the new generation of “artificial sun”, is displayed at a research laboratory in Chengdu, in eastern China’s Sichuan province on December 4, 2020. – China successfully powered its “artificial sun” nuclear fusion reactor for the first time, state media reported on December 4, marking a great advance in the country’s nuclear power research capabilities. (Photo by STR / AFP) / China OUT (Photo by STR/AFP via Getty Images)” 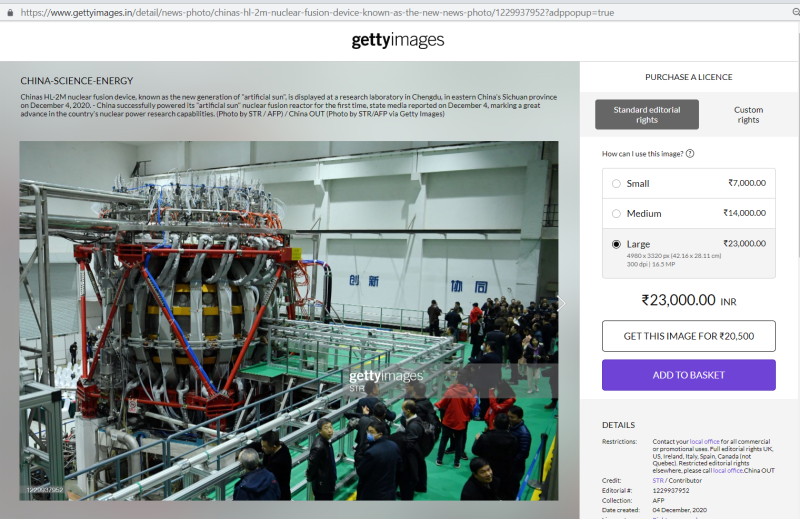 We found that many people had tweeted that the viral video is not of the artificial sun but of a rocket launch. 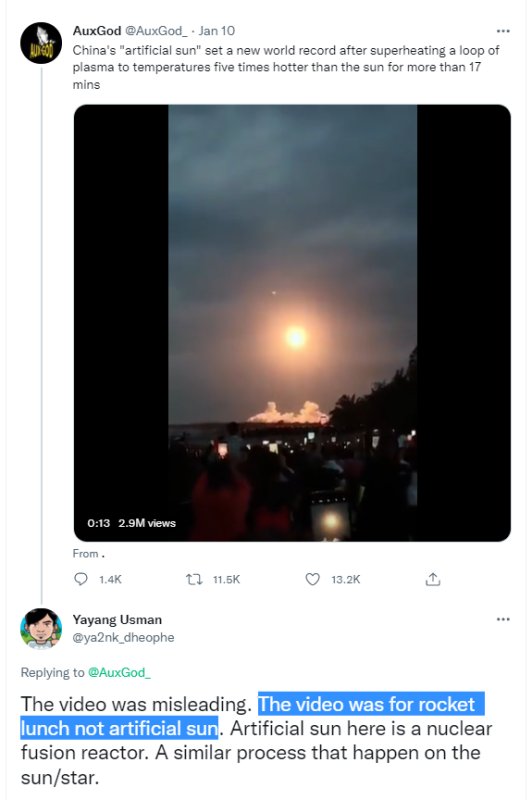 On listening to the video carefully, we can hear people speaking in Mandarin. We further observed that the viral video shows a trail of exhaust gasses that match the launch of satellites Shiyan 12-01 and Shiyan 12-02, the two secret satellites launched by China. A YouTube video also shows the launch of the satellite, with the description that reads, “China successfully launched two secret satellites on 23rd Dec 2021. The pair of satellites are named Experimental-12 01 and 02, the design purpose of both are kept secret.” 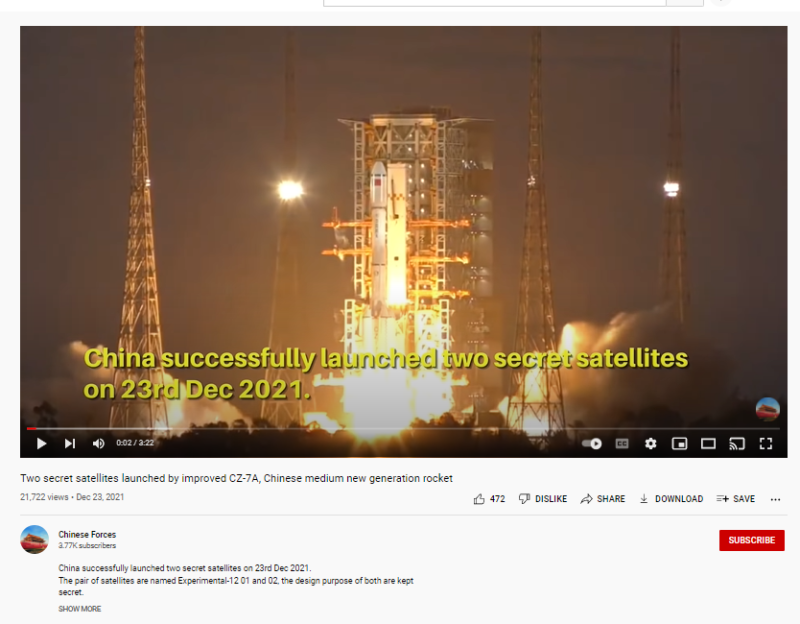 A website NASA Flight also published an image of the Chinese rocket Chang Zheng, in which we can see a trail of exhaust gases coming out of the rocket. 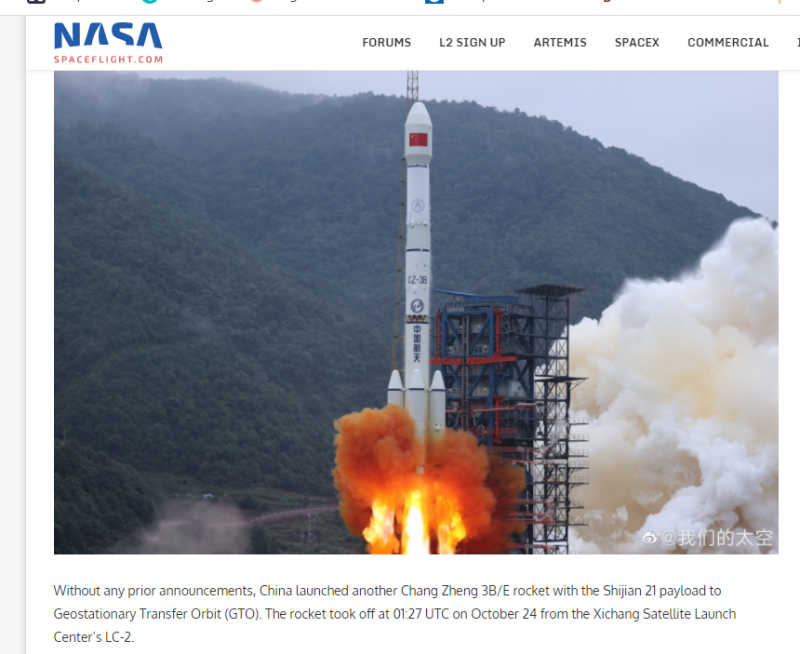 NewsMobile independently cannot confirm the origin and location of the video. However, it is clear that the viral claim is misleading.