A video of a man hanging from a helicopter is doing rounds on social media with a claim that Taliban executed him and hung him from a US military helicopter.

“If you had any doubts about the “diplomacy” of the Taliban, here is a picture of how they handle their “enemies”. That’s an American Blackhawk helicopter….and that’s a man hanging by his neck, in case you were wondering,” the Facebook post read. 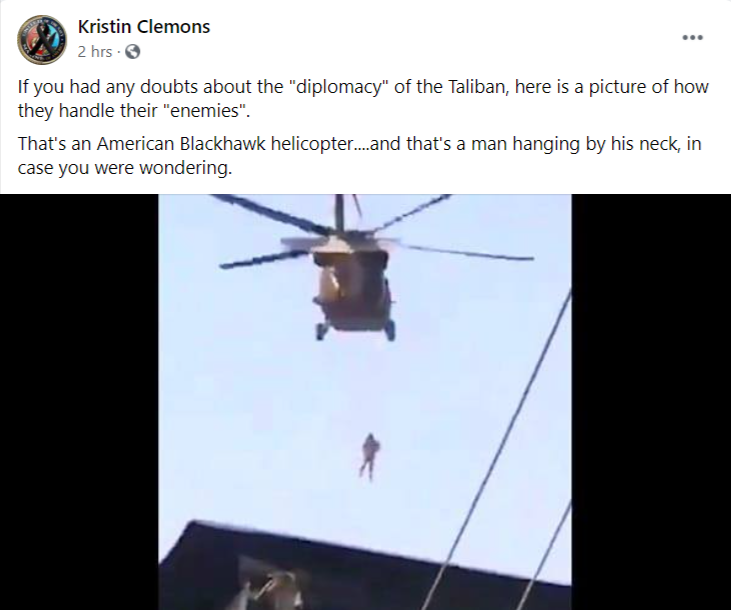 Here’s the link to the above post. More such posts can be seen here and here.

We fact checked the post and found the claim to be misleading.

We ran a keyword search and found a tweet by Glenn Kessler, Editor and Chief Writer of Washington Post’s Fact Checker, where he clarified that the video is being shared with a misleading context.

“The original video was posted with “I swear I don’t know what’s going on here.” @Natsecjeff — ie, counterterrorism expert Faran Jeffrey — said he checked later and it is “apparently a TB militant hanging from a rope with a TB flag.” So please delete your tweets and retweets,” he said in a tweet thread.

Taking a cue from this, we then ran another search and found a tweet dated August 30, by Sadiqullah Afghan who is the head of Tabassum Radio, an Afghan radio station.

“A helicopter has been spotted at the Kandahar governor’s office, with one person hanging, officials have not yet commented,” the translation of the tweet read. 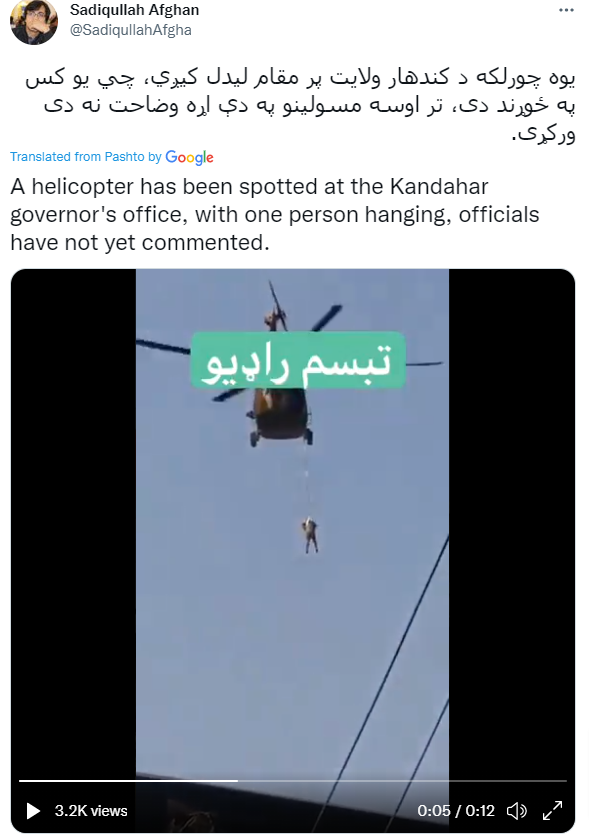 Talking to Fact Crescendo, Sadiqullah Afghan said, “I had shot the video on my phone yesterday near the Provincial Government Building in Kandahar. We saw a man hanging to a helicopter and we were amazed. Later, we learned that it was a Talibani fighter who was trying to hoist the Talibani flag on a post inside the building premises. It was not any innocent who was hanged to death by Taliban, the narrative going viral on social media is fake.”

Moreover, we found another video of the same incident on the Twitter handle of Shayan Sardarizadeh a journalist working with BBC.

“A viral video claiming to show a man being brutally hanged from a helicopter in Kandahar was likely an attempt to fix a flag over a public building, not a hanging. A separate video of the incident shows the man is clearly alive and waving in the air,” he tweeted.

In the video, the man can be seen making some gestures while dangling from the aircraft with a rope tied to his back.

We also found a tweet by an Afghan journalist Bilal Sarwary on August 31, 2021, where he dismissed the viral claim. “Afghan pilot flying this is someone I have known over the years. He was trained in the US and UAE, he confirmed to me that he flew the Blackhawk helicopter. Taliban fighter seen here was trying to install Taliban flag from air but it didn’t work in the end, ” he tweeted. 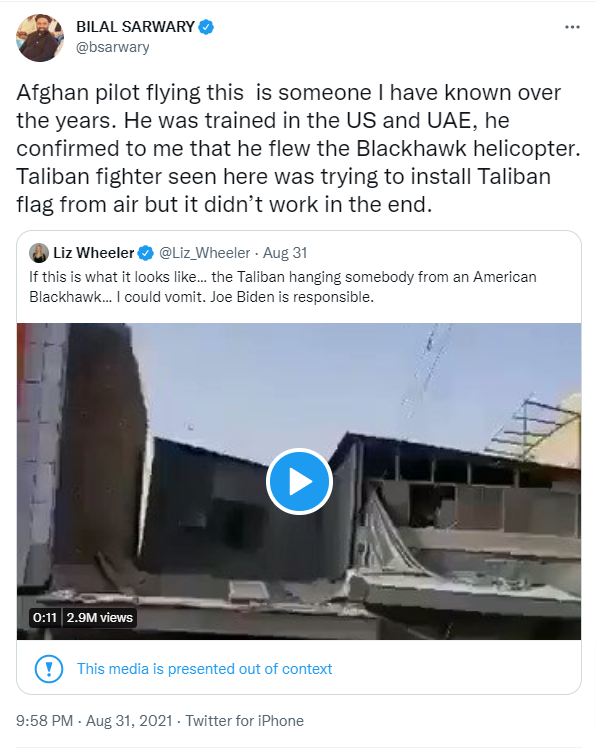 Upon running a keyword search, we found that videos of the same incident, taken from different angles, were also shared on Facebook. The posts can be seen here and here.

Hence, from the above information, it is clear that video is being circulated online with a misleading claim.