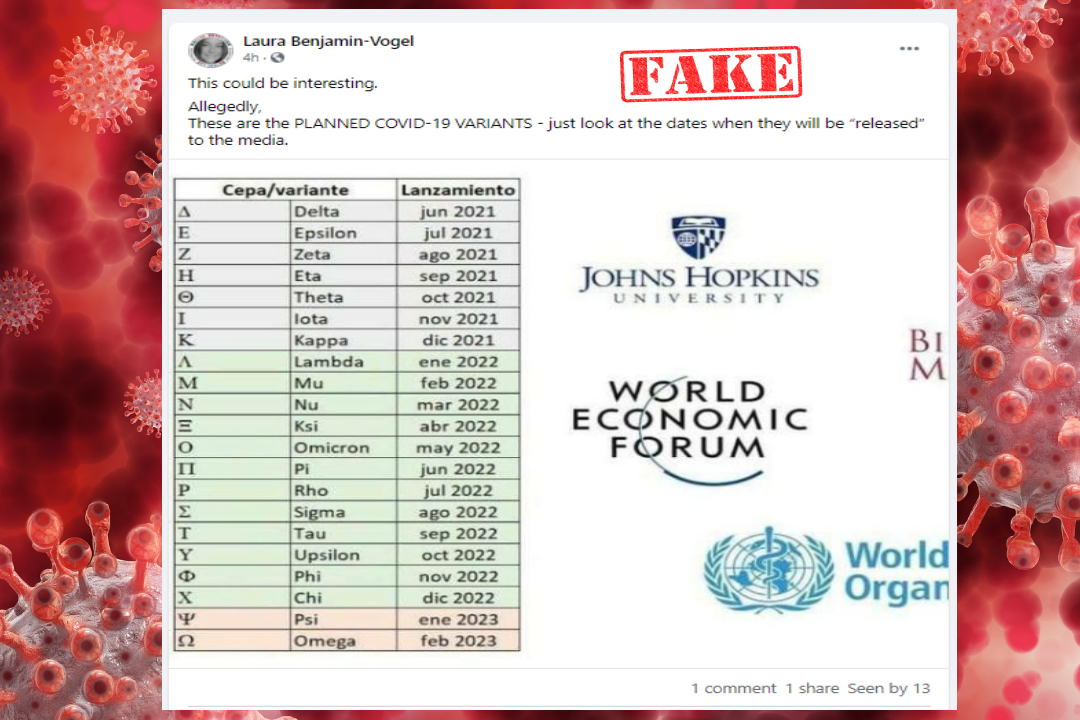 The post is shared with a claim that reads, “This could be interesting. Allegedly, These are the PLANNED COVID-19 VARIANTS – just look at the dates when they will be “released” to the media.” 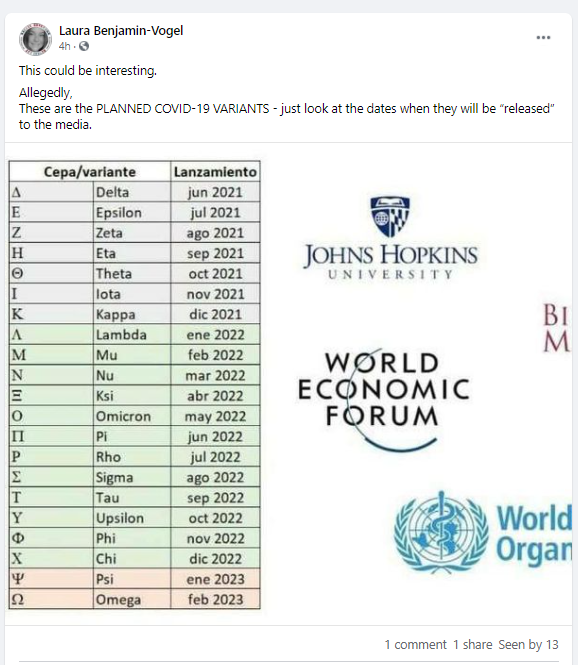 One of the viral posts shared a link of Center For Health Security to claim that the viral list is sourced from the website. However, the website speaks about an event, EVENT 201, jointly conducted by Johns Hopkins Center for Health Security, World Economic Forum, and Bill & Melinda Gates Foundation on October 18, 2019.

The event was focused on the ‘responses to the scenario that illuminated the need for cooperation among industry, national governments, key international institutions, and civil society, to avoid the catastrophic consequences that could arise from a large-scale pandemic.’ The website page does not have any list of variants or the dates when these variants will be released.

All the viral posts also have logos of John Hopkins, World Economic Forum, and World Health Organisation to show that the data has been sourced from these prominent organizations. Hence, we checked the social media and websites of the mentioned organisations to gather more information on the same.

According to Jonh Hopkins, variants of viruses occur when there is a change — or mutation — to the virus’s genes. Multiple variants of SARS-CoV-2 coronavirus are detected which are different from the first reported in China.

The report quoted Stuart Ray, M.D., vice chair of medicine for data integrity and analytics, who said, “New variants of the SARS-CoV-2 virus are detected every week. Most come and go — some persist but don’t become more common; some increase in the population for a while, and then fizzle out. When a change in the infection pattern first pops up, it can be very hard to tell what’s driving the trend — changes to the virus, or changes in human behaviour. It is worrisome that similar changes to the spike protein are arising independently on multiple continents.”

WHO on new COVID-19 variants:

WHO reiterated the same thing as said by John Hopkins. According to WHO, all viruses including SARS-CoV-2 change their sequencing over time, with little or no change in the property. However, some changes impact their properties like how easily it spreads, the associated disease severity, therapeutic medicines, diagnostic tools, the performance of vaccines, or other public health and social measures.

WHO said that the variants of coronavirus emerged in late 2020. These variants posed an increased risk to global public health and prompted the characterization of specific Variants of Interest (VOIs) and Variants of Concern (VOCs). Monitoring and research on these variants can be done globally.

WHO also provided easy-to-pronounce and non-stigmatising labels for VOI and VOC variants like Alpha, Beta, Gamma, Delta which will be easier and more practical to be discussed by non-scientific audiences. 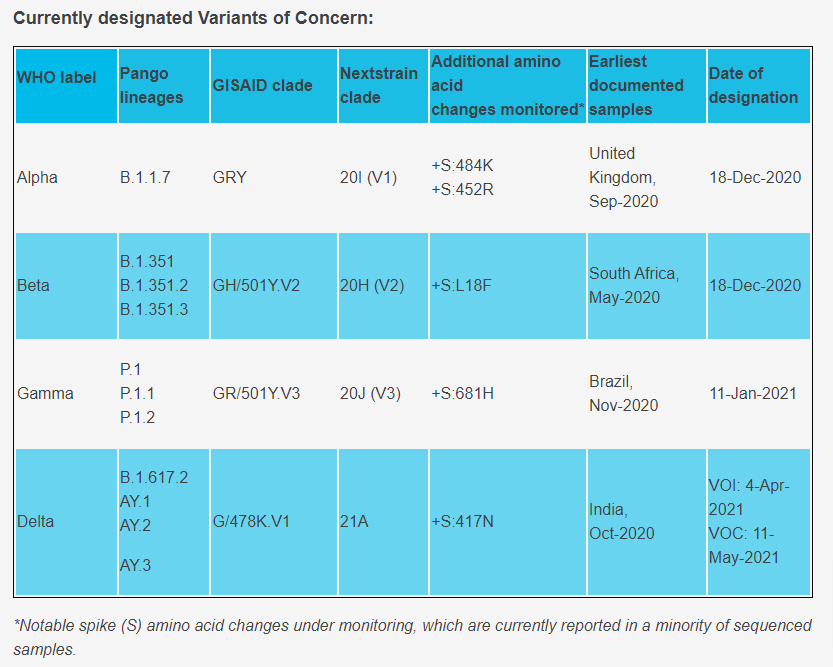 At the time of writing the article, four variants (Alpha, Beta, Gamma and Delta) were categorised as Variants of Concern (VOC), four variants (Eta, Iota, Kappa and Lambda) were under Variants of Interest(VOI). Moreover, some of the variants (Theta, zeta, and epsilon) which were once listed as VOIs have been downgraded to the ‘alerts for further monitoring’ category as their evidence of phenotypic or epidemiological impact is currently unclear.

We also found no reports from the World Economic Forum that mentions a list of variants of coronavirus.

The viral list mentions the date when the new variant will be released. However, when we compared it with the list published by WHO on when the variants of coronavirus were detected, we found it to be completely different.

We also found that the other variants of coronavirus Alpha, Beta, and Gamma were not on the list. The earliest documented samples of which were September 2020 (in the United Kingdom), May 2020 (in South Africa), and November 2020 (in Brazil) respectively. The dates of designation of these viruses as Virus of Concern are Alpha: December 18, 2020, Beta: December 18, 2020, and Gamma: January 11, 2021.

Hence, we can ascertain that the viral list is fake.